It has been a busy week, and as such not a whole lot of time to update, but we’re back and gearing up for our big spring cleaning promotion set to launch Tuesday the 29th. It’s going to be a good one, so stay tuned for more updates. In the meantime, how about another common misconception? This one might just go ahead and contradict the entire premise of this series (i.e. that spring cleaning is just an excuse for a cheap marketing ploy), so it turns out I’m not immune from making these mistakes either. Who knew?

#4: “Spring cleaning is just an excuse for a cheap marketing push. It doesn’t matter when you clean stuff.”

END_OF_DOCUMENT_TOKEN_TO_BE_REPLACED 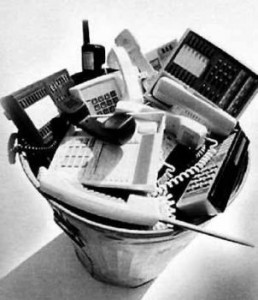 Technology is often a double-edged sword: in one respect it innovates and makes past conveniences more useful but at the same time it adds to our own growing collection of personal clutter.  If you’re like me old devices end up in a box in the back of my closet or they remain on my shelf collecting dust and cobwebs instead of being thrown out when the latest ‘i-device’ comes out.

The New York Times recently wrote an article recommending which old devices you should throw out that are collecting dust on desks/shelves and in closets all across the city.  As they put it, it’s easy to say that “that paper maps and Rolodexes have given way to their digital counterparts” but what about that desktop computer sitting on your desk or the camcorder from 1998 in your closet and what about the books with fading pages on your shelves?  Lose it, Lose it and, surprisingly, keep them the Times says and we concur, except maybe on that last one regarding books.

For those in the spring cleaning mode or for those of us not wanting to show up on the next episode of Hoarders, getting rid of your extra/outdated  devices will be a good thing.  What to do about that alarm clock, GPS Unit, MP3 Player, and cable TV – all of which have been replaced by better modes of technology?  Check out the NYT article and come back and tell us which devices you’re going to let go of in the spirit of spring cleaning!

The Recruit, a middling spy thriller with little going for it besides Al Pacino, hinged around a mostly ignored plot point that was alternately ignored or made into the focus that blinded moviegoers to all other plot devices going on: Colin Farrell invented a piece of software that would give him the ability to stream content from his laptop to any screen or device around him. It was a fascinating idea, and at the time a couple of people on the burgeoning device-hacking/maker scene spent countless hours with some limited success creating devices to do just that. CarWhisperer was probably the most well-known, widespread, and widely covered success, though there were other far more shady projects going on simultaneously. END_OF_DOCUMENT_TOKEN_TO_BE_REPLACED

Well, it looks like we inadvertently skipped a day on Friday. The construction we’ve had going on for over a week now required us to move stuff around and the blog post became a casualty of time. But never fear, we will persevere. Stiff upper lip and carry on and all that. Today, we’re looking at the second part of the compressed air myth, and hopefully teaching you a little more science. Because, you know, Science!

END_OF_DOCUMENT_TOKEN_TO_BE_REPLACED

And we’re back for another exciting installment of the column where we learn that things we thought we know are actually wrong. Today, we’ll tackle a…well, not so much a misconception as an incomplete thought, centering on removing the dust and gunk form inside your computer case. And I hope you’re reading this outside on your laptop in a park, because missing this gorgeous day would be a crime worse than my occasional butchering of the English language.

#2: “You should open your case up every couple of months and spray it out with canned air. You can pick the stuff up for dirt cheap at the .99c store!”

Personally, I love compressed air. I remember as a kid turning the can upside down and pushing the trigger in real slow and watching the rapidly condensing moisture fall and his as the expanding air caused a sharp and rapid drop in temperature. It’s actually another common misconception that the liquid that comes out is whatever chemicals have been stuffed into the can, but it’s actually just the microscopic water particles in the air condensing around the nozzle. The air coming out of the can expands so rapidly that (as we learned in high school chemistry) it causes the air to cool. The reason this isn’t noticeable unless you push the trigger in slowly is that with more force, the cold air moves too fast to cause a noticeable temperature drop since the cold is spread out over a larger area. The more you know! ⌂

END_OF_DOCUMENT_TOKEN_TO_BE_REPLACED

With daylight savings time catching us by surprise, and the temperatures here in NYC hovering right around 50, it’s finally safe to say that spring has almost sprung. There go those lift-passes I hadn’t had time to use. Oh well. And with spring just about here, we will soon be inundated with the usual flood of “Spring Clean Your Computer!!” articles, in which overly-peppy reporters who can barely turn on

their Powerbooks talk to an “expert” (usually, the only BestBuy employee who couldn’t invent a plausible excuse fast enough) about things that they don’t quite understand themselves and then string the words together in a way that makes things easy to understand but is generally pretty much completely wrong. Don’t you worry, we’ll get to the spring cleaning fever ourselves, but first we thought it might be helpful if we took a minute to dust off the shelves of conventional wisdom and common knowledge, pulled out the clutter of outdated truisms and unsubstantiated rumor, and replaced them with the bright, shiny, polished trophy of truth and accurate information. So without further ado, here is a list of the top 10 computer maintenance misconceptions and downright falsehoods, presented as a daily series (that’s right, you have to wait a day between tips):

END_OF_DOCUMENT_TOKEN_TO_BE_REPLACED

It seems fitting that on Pi day (March 14th, or 3/14: named for the irrational number π which loosely translates to 3.14159 and goes on forever from there), the geekiest unofficial holiday of the year, we are taking a look at the iPad 2, the least geeky gadget ever made. Released 3 days ago on March 11th, the iPad 2 is…well, the 2nd iteration of the iPad, and that pretty much tells you everything you need to know. I’m sure there will be people who decry this lack of enthusiasm, but and wax eloquently about how the few, subtle changes Apple made render this a new device, the deus ex machina of tablets, infinitely superior to everything that came before (See this review in the NYT for an example). These are probably the people still clutching their Newtons and praising the devices as strokes of genius ahead of their time. But enough of that, let’s see what’s in store for millions of consumers who rush to pick one of these up.

END_OF_DOCUMENT_TOKEN_TO_BE_REPLACED

It used to be fake Oakley sunglasses, or Foakleys as they were commonly called. Then came the knock-off Louis Vouiton, Prada, and Coach bags. Now, we at LaptopMD+ have captured the next level of counterfeits being peddled on Craigslist, Ebay, and in shady shops along Canal St.: The counterfeit iPhone4.

It’s not a new problem by any means. In fact since the very first iPhone came out, eBay has had their work cut out for them trying to single out and shut down counterfeit operations. Those early fakes were obvious, and anyone who received one knew right away that what they paid for was not an authentic Apple product. But the counterfeiters, many working with factories in China, many employing the same people that were former employees of the very factories that Apple itself uses to make iPhone components, have learned and improved. We recently had a counterfeit iPhone 4 cross our desks, and even our techs had difficulty telling it apart from the real thing on first sight.

END_OF_DOCUMENT_TOKEN_TO_BE_REPLACED 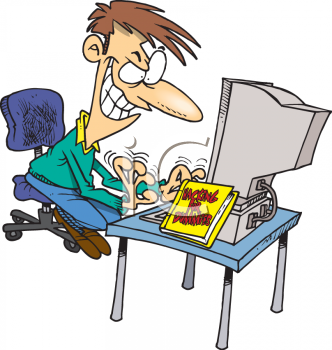 Security experts and technology pundits have spent a long time now warning people about the dangers of unsecured wireless networks. As technology improves and more and more people go wireless and mobile, this has become an even bigger issue, and while we often look to quick technological fixes, more and more it looks like technology is making things worse instead of better.

Case in point? A little program released in October of last year called Firesheep has made it a snap for strangers to follow your browsing, and even log in as you to websites you’ve visited, on unsecured wireless networks.

The New York Times has an interesting piece on new (and not so new) technology that makes hacking wireless networks simple. Some of the programs showcased, like Firesheep, are relatively new and allow even users who can barely connect their printer to snoop on wireless activity. Especially troubling is the fact that those snoops can intercept your login information and access the websites and services that you used. A mild example would be a hacker taking your Twitter account info and posting spam under your name (something that has personally happened to me. It’s not fun to clean up after.)

A much more terrifying example would be a hacker stealing your credit card info if you used an e-commerce site that didn’t support SSL encryption (they’re out there, especially on smaller boutique e-stores). The take-away from this is never ever use a public, open wi-fi network to do anything unless you would be comfortable giving a play-by-play of all your activity to everyone around you by way of a megaphone. If you wouldn’t feel comfortable telling the barista at Starbucks where you’re surfing don’t surf there; save it for your home wired or secure wireless network.