… but LaptopMD has been offering white iPhone 4 conversion services for the past 6 months and will continue to do so with the same parts that Apple uses.

Today, Apple announced that the long-awaited White iPhone 4 is now available to consumers wishing to experience the latest in iPhone fashion trends.  The White iPhone is equally priced with its black predecessor and now Apple offers the customers the ability to choose the color of their iPhone – black or white.

LaptopMD continues to offer white iPhone 4 conversion to customers wishing to save money for the iPhone 5 which is rumored to come out later this year, possibly in September 2011 or even earlier.

Was the wait worth the release of the White iPhone 4 or will you be holding your breath until September when the iPhone 5 will hopefully be released? 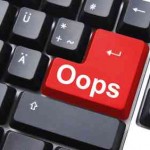 It seems the major cell phone OS companies just can’t let us have a break from their controversial shenanigans this month. First, highlighting both the vulnerabilities of the Android operating system, and Google’s powers to deal with it, we learned that the several apps in the Android Marketplace came with a bonus feature: a worm that could transmit you and your phones private info to the controllers of the virus. In a move that shouldn’t have been shocking, since the ability to do so is both written into the EULA for the Android OS and is found on every other cell phone OS, Google admitted that it had the power to reach into private users’ phones and remove the offending program remotely and without any notification to the user. Now, they sent notification anyway, apparently learning from the Buzz fiasco, but many people were still shocked and offended. Despite giving consent through the EULA, and despite the ability to do this sort of thing is standard for Google, RIM’s Blackberry OS, iOS, WinPhone7, and even Symbian and Palm OS.

Then, we shockingly discovered the meaning of the once-cryptic phrase found in our phone’s user guide: “iOS/Android may periodically send anonymous location information to Apple/Google.” Turns out, it means that iOs/Android may periodically send anonymous location information to Apple/Google. Mass hysteria and populist outrage broke out when it was discovered that Apple, and later Google, would periodically get location updates from users with smartphones. Because anonymous user information collection is now an invasion of privacy, because Apple “MIGHT” take the next step and collect private information, and then it “MIGHT” take the next step to selling or doing bad things with that information, and then it “MIGHT” trip on a slippery slope and then it’s goodbye freedom, hello 1984. Or, on the other hand, Apple “MIGHT” use it’s billions upon billions in cash reserves to simply tranquilize all Americans and implant them with a GPS location device, saving themselves a huge PR hassle.

Finally, it seems that congress has found itself with nothing to do and has plenty of time to kill (you know, now that the economy is completely fixed, unemployment is in the negatives, and we have secured freedom and democracy in every country in the world), so it has launched an investigation into the location tracking done by Apple and whether it was legal for apple to build in this capability. Despite a law passed in 2001 saying that this capability had to be built in. By law. Passed by congress. Rumor has it that Jobs has refused to acknowledge the congressional probe because it was formated for PC’s and could not be read. 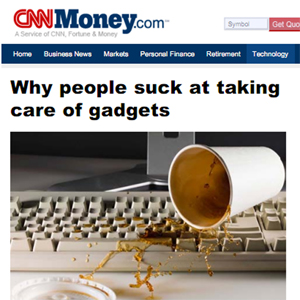 We’ve made the news again! Following in the footsteps of such exciting developments as being featured in the Wall Street Journal, recommended in Time Out New York, and being interviewed on WPIX-11, we have one more notch to put on our belt.

Our intrepid founder, Arthur Zilberman, is quoted for a CNN Money tech blog about the importance of backing up data and why electronic gadgets just don’t seem to last as long we think they should. Highlights include:

“People have to remember that computers are machines — their parts wear out like the tires on a car,” says Arthur Zilberman, owner of Manhattan repair shop LaptopMD.

“We have people coming in crying every single day over losing term papers and photos,” Zilberman says. “They pay thousands of dollars to try to retrieve their data. If everyone backed up, we’d have a lot less business.”

And backup your data. But not too often, or we’ll go out of business and you’ll miss seeing our awesome blog posts.

In lieu of our more traditional posts, I wanted to share something a little more fun and interesting with all of you today. We get quite a few data recovery jobs coming in to the office: people drop their hard drives, or a power short knocks out their computer, or they accidentally delete their files. Usually, we can do some cyber sleuthing and pull that information right off. And if we can’t do it, we know people who can.

But what happens when you REALLY want to get rid of an old CD? Like that Hannah Montana mix disc you made that you told people was your sisters? Well, sometimes a video is worth a thousand word blog post:

The blogosphere and news media have been abuzz recently with news that Apple may not meet its traditional product release dates for the iPhone 5 and the accompanying iOS 5, which is their mobile operating system. Several theories are abound as to why Apple may be switching up their usually structured release schedule ranging from supply problems in Japan to time constraints of their supposedly feature ladened updates to a shift in product release strategy. As a consumer waiting anxiously for the new iPhone I can tell you that being given a date range of somewhere between April and October (the last time frame to adequately take advantage of the holiday shopping season) is maddening.

The delays aside, the wait will probably be well worth it but that doesn’t mean I can’t keep from dreaming of its features.  AppleInsider, a leading Apple news blog, has been reporting that iOS 5 will most likely feature a free cloud storage and sharing service and more integrated voice commands, among other as of yet unknown features.

I think the wait will be worth it, for sure, but we want to know what you think: Will the extended wait for the new iPhone releases be worth it or will the Android OS maintain its current edge? Vote now in our very unscientific facebook poll or leave your thoughts in the comments section of this post.