I’ve been told by Google that we are entering a new age of computing. I’ve been told that it’s time to throw away legacy apps and soar full-speed into the cloud. I’ve been told that this is the future and anyone who doesn’t jump on board is a relic destined to be nothing more than a footnote in computing history. I think Google is trying a little too hard. I’ve had a Google Docs account since they went public, a Picasa and Flickr account since long before that. While some people struggle to embrace the lack of an OS, my generation has grown up with the cloud and we’ve been ready for a long time now. 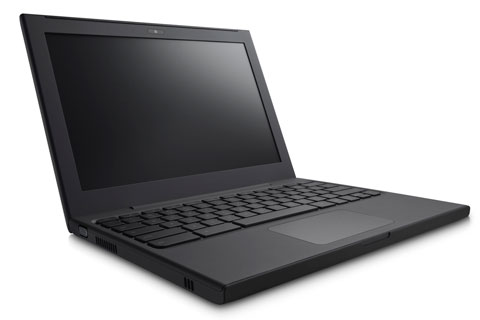 So it was with great excitement that I unpacked the plain, unmarked UPS box that arrived at our door yesterday. Inside was a svelte, sleek, unmarked black laptop. And a sheet of stickers, though why you would want to cover the matte black exterior in stickers is beyond me. The laptop itself has been described as ‘cheap’ by the majority of the tech press, but I would instead say ‘utilitarian’. It comes completely free of any embellishments, and is coated in a rubbery finish that says “this machine was built for a purpose, and impressing people who don’t know what this is is not it.” Hefting it out of the box, the laptop is light, though not as light as the new Macbook Airs or some of the other more modern ultra-portables out there. Given that the laptop was clearly manufactured to be as cheap as possible, this is not surprising, and it is certainly light enough that hauling it around presents no problem even for the most atrophied of basement dwellers. Since this is not a production laptop and will never see a store shelf or a paying customer, some corners have been cut and it shows, mainly in the battery refusing to sit flush with the case. This is a tiny concern, though, and the shell has always been secondary to the OS underneath.

Popping the lid open, the first thing that becomes apparent is just how much inspiration Google took from Apple in designing this shell. From the buttons to the contours of the touchpad, the whole thing looks like an off-brand apple clone. This could be seen as either a good thing or a bad thing, depending on your perspective. Personally, I don’t like the flat, square, apple-style keys, and have had difficulty with them in the past, however on the chrome they seem to work out too well. Oddly, I find that my typing is significantly better and more accurate when I look away from the keyboard and trust to touch-typing instinct. The second thing you notice is that the laptop is on and powers up almost instantly. After a quick introductory sign-up process, you are taken to a familiar blank tab in a Chrome browser. Except here’s the twist: it’s not the Chrome browser, it’s the whole operating system. There is absolutely nothing behind the browser, and while that may prove to be a bit of a leap for people more used to traditional OSes, I had no trouble jumping in and getting acclimated. All tasks are accomplished through the Google Chrome Store, with most of the apps consisting of simple bookmarks to cloud services. One thing I was somewhat disappointed about was the lack of support for browser extensions. Some of my favorite tools are only available in extension form, and not being able to use them caused a bit of a scramble as I tried to adjust. I also tried powering the notebook down and starting it back up and am pleased to say that Google’s power-up number of 1.2 seconds is not an exaggeration. It really is that fast.

Having a 3-day trip planned this weekend, I figured this would be the perfect time to see if I was ready to live in the cloud. The short answer: no. The long answer: Yes, but the world isn’t ready for me to make that leap yet. I was flying out early in the morning, and unplugged the charging Cr-48 at about 9AM that day. Got to the airport just in time to make my flight, settled in, and waited till we hit the 10,000ft ceiling at which I could pull out my laptop…and promptly realized that JetBlue does not offer in-flight wi-fi, nor could I use the free 100mb of free monthly cellular data that Google kindly threw in with the notebook. As an aside, 100mb of data per month is a bit of a joke for a laptop. So there I was, with a brand new laptop, with a brand new OS, and all I could do was play the one flash game that had apparently been loaded into cache. I like Entangled, but by hour 2 I was about to go crazy. Finaly arriving at my destination and latching on to an open WiFi signal, I was able to really play with the laptop and the OS.

The first thing I’ll say is that it is clear that this is a cheap piece of hardware. It will frequently stutter if asked to render anything very complex, and will stream HD movies at an abysmal frame-rate. For less graphic-intensive application, the computer runs smooth and fast, and the OS itself, as much as it can be said to be an OS, is lightning fast. Having never really looked at the Chrome Store, I headed over and found to my amazement that pretty much everything I wanted was available online. Photo editing? Check, in HTML5 glory thanks to Aviary. Python coding? Kodingen takes care of most popular languages. Pretty much anything you will want to do is available in app form. They don’t always work great, and for things like serious graphics design they are not anywhere close to being a substitute, but they are more than good enough to use Chrome OS as either your primary laptop or at least your travel laptop. The biggest challenge I encountered is transferring files from one app to another. The OS does have some local storage, but there is no clear file structure, everything just downloads into a single list, helpfully titled “Downloads”. Going forward, it would be good of Google to create some sort of standardized sharing platform, or virtual hard drive of sorts, to make these cross-app transfers smoother and easier.

When signing up for the beta, Google warns people that this is not for the feint of heart. That things will go wrong, break, die, and possibly explode. They caution would be users that this is the first public outing of the system, with everything that that implies. Personally, what I found in my Cr-48 was a surprisingly polished, focused product that is well on it’s way to being consumer ready by the time the first commercial Chrome OS laptops ship sometime later this year. It certainly is not for everyone, as some people will be seriously put off by the lack of a real local back-end. This could be especially frustrating in areas where open WiFi networks are not nearly as prevalent as they are here in NYC, and until Google’s plan to cover the nation in free WiFif comes to fruition this is a legitimate complaint. My solution so far has been to load a copy of Ubuntu and boot to that when I have no signal, but I understand even as easy as Ubuntu is this solution is not for everyone. For people that have easy access to wireless internet and are looking for something fast, sleek, and cutting edge though, Chrome OS performs beautifully.

0 thoughts on “No Tail-Fins, No Whitewalls, Plenty of Chrome: Chrome Cr-48 Review”