Apple’s iPhone and Samsung’s Galaxy series are probably the most popular phones on the market, in a general sense.  I mean it’s really the iPhone by some margin, then the Galaxy is leading the pack left behind Apple’s top seller.  However, while Samsung probably wishes they were leading the market, or at least at a 50/50 split with Apple, don’t worry about them. 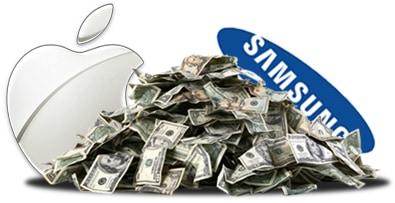 In addition to being a massive manufacturer of their own phones, Samsung creates a lot of parts that get used in the iPhone.  This is extremely relevant right now because according to PC Mag, Samsung will get approximately $110 for every iPhone X sold.  So, the new iPhone that is going to keep Apple moving forward, is going to be paying Samsung’s bills too, keeping the iPhone’s closest competitor in the race.

In fact, there are projected to be approximately 50 million Samsung Galaxy S8 sales (which are thought to net Samsung $202) but 130 million iPhone X sales.  You can do the math, that means Samsung would legitimately make more money off of iPhones than their own Galaxies.

In the simplest of explanations, it’s really a result of supply-and-demand.  Apple wouldn’t be paying Samsung for their parts if they didn’t have to – they probably wish they could be manufacturing every part required for use in their iPhones, but they can’t.  And every recent iPhone uses parts from other manufacturers, the real problem is the iPhone X’s OLED screen.

The iPhone X’s screen is huge and Samsung may be the only potential manufacturer for it due to the enormous demand Apple is needing to fill.  If the iPhone X wasn’t expected to achieve such high sales numbers, they could probably go to a different manufacturer, or try to keep the entire process inside their company.

Samsung stands to lose a lot if they stop providing parts for iPhones, and they can’t guarantee that their phones would then skyrocket in popularity (if the iPhone’s quality suffered as a result).  For the time being, it seems the two competitors are tied together.

Samsung wins either way. Either the iPhone outperforms the Galaxy by a huge margin like expected, and they still make a lot of money from both their own phone and the iPhone.  If the iPhone X doesn’t reach the high projections, the most likely candidate to replace the iPhone X in a consumer’s hand might be the Galaxy S8, which Samsung won’t be upset about either.

Last Thursday we celebrated the birthday of Zoltan, one of our best medics! We know, our engineers know devices so well you’re not even sure sometimes, but we are human! We like to celebrate the special moments in our lives. The day was full of Pizza, chocolate cake, and chips. OK, they were motherboard chips to be replaced, but we still had fun!

Our engineers have traveled together, played paintball vs. rival services (and won), and even attended a Russian cabaret. There’s no telling what fun we’ll get ourselves into when we’re not providing you excellent device repair. We have a live camera on our website, so the next time we have a party, check it out with us!

Random Trivia: Zoltan has an IQ of 155, has worked in antiquity repair for a brief period of his life, and was the “local Howard Stern” DJ in Hungary during the time that he lived in Europe.