We’ve all been here…you leave the house in a hurry with your phone in hand, but you forget to grab your charger. As the day goes on, you watch your battery draining and know that the battery will die before you get home to charge it.

No one wants to be left with a dead phone. iPhones are amazing devices, but so often the battery doesn’t last as long as you would like it to. There are many ways you can extend the life of your iPhone’s battery by simply changing a few settings.

Simply click the button that will send you into Low Power Mode. You will most likely not notice any difference in the way your phone is functioning in this mode.

2. Don’t Share
Your Every Move: It can be nice to keep in touch with friends and family and let them know where you are. iOS 9 has a feature that allows you to share your location with your friends and family in Messages. While it is nice for people to know where you are, is it really important that they see your every move?
This little feature can aid in draining your battery. One way to extend your battery life is to shut off this feature.
3. Kill Hungry Apps:
You may not realize it, but some apps are more hungry than others and eat away at your battery life all day long. In desperation, you may often go into your phone and try to close all of the apps, trying to save your battery life. However, now you have another option. If you go into Settings and click on Battery Life, you can see which apps are most proficient at draining your battery.
Close the apps with the highest percentage of battery drain in the last 24 hours. Social media apps are often the worst culprits, but after a few times of checking this feature, you’ll get to know which ones should be closed and which can remain open.
4. Stop Apps Refreshing in the Background.
Whenever you are on WI-FI or even on your mobile network (which is pretty much all the time), your phone is working overtime trying to make sure that all of your apps are refreshed for you. You can extend your battery life by turning this feature off completely, or you can turn it off app by app by going to Settings, General, and then Background App Refresh.
Your apps will then refresh only when you open them, and your battery will not have to work overtime when you aren’t using the apps anyway.
5. Don’t Close Every App:
This sounds counter-intuitive, as we have been taught that if the battery life is draining that we must close each and every app. Believe it or not, the new operating system is designed to efficiently handle apps running in the background.
Closing the app and then reopening a sleeping app over and over again wastes more battery life than simply having the app open in the background. So if you have a few apps that you continually use, it is okay to leave them running in the background.
6. Use WI-FI Wherever Possible:
You may have been told to turn off your WI-FI to save battery life, but the opposite is actually true.
Using mobile data uses far more of your battery life than using WI-FI, so whenever possible, have your WI-FI setting on and connect to the local WI-FI.
To be continued…..

Can anyone even tell that Spring has actually sprung? With the chilly weather outside, it still feels like Winter. However, our prices for iPhone screen replacement are melting with the snow!

These prices are now cheaper than ever, so you’ll want to rush in from the cold to take advantage.

Wonderful deal!
Our screen replacement deals are:
We can have the screen replaced for you quickly in just 15 minutes. A new screen also comes with a Limited Life Time Warranty. What a deal! Where else can you find prices like this with all of these bonuses?
These prices are the same at each of our locations, including Manhattan; Pomton Plains, NJ; and Morristown, NJ.
We always take care of you!
We value our customers, so throughout our fifteen years of experience, we have constantly evaluated and improved our service. And we continue to do so today. We truly appreciate the trust and loyalty that our clients place in us. We will do everything in our power to help you and make sure you’re satisfied. No one is more important to our business than you.
Don’t forget that if you have any issues with your device, we are conveniently close! So, if you want to add some spring to your step and take advantage of our melting prices that are now cheaper than ever, just swing by today. 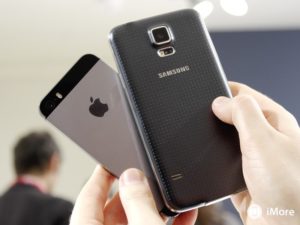 A little variety is needed with everything. No one wants a plate full of veggies, or a plate full of meat (well, most of us don’t). Why should we settle for such a monopoly in the phone market?

Apple, Android and Windows phone account for 95% of the modern phone market, but there are at least a half dozen other open source operating systems. Why don’t we hear more about them? Why are the politics behind our most integral modern device ran by pretty much two companies?

END_OF_DOCUMENT_TOKEN_TO_BE_REPLACED

A public power outlet is a gold mine isn’t it? I know when I’m out with a certain friend he takes advantage of every working power outlet he can. He’s constantly on his iPhone. If he’s not e-mailing, he’s searching social media or taking pictures. Once his phone hits below a certain percentage he suddenly becomes a character in an adventure film, on a far and wide source for the hidden power. Sometimes the place we eat lunch depends on whether he can charge his phone. Yes, it’s that bad.

I’ve slowly realized that instead of combing backstreets and awkwardly procrastinating in stores until he gets a decent charge, I could be a little more proactive in helping him. We did some hands on research and found myriad ways to preserve an iPhone battery. This is iPhone centric, but some of the general rules apply to all smartphones. There are very practical solutions, as well as some I never would have thought about. At LaptopMD we’re known for curing smartphones, but part of any good Medic’s duty is making sure your phone is always in peak condition. Here are some tips for iPhone owners:

Don’t Kill Your Apps! – This is the most obvious solution……except it’s not a solution. The iOS system doesn’t actually hold background memory on Apps, so when you’re not using an app, it holds exactly 0% of your CPU, and subsequently none of your battery. Constantly “killing” your Apps does nothing but drain your battery.